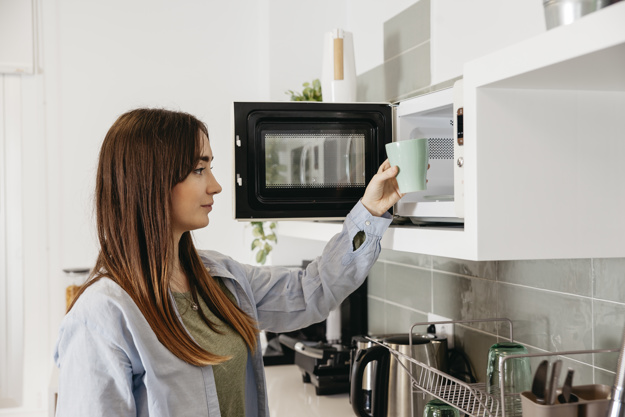 You may have heard that microwave ovens are dangerous. However, most people’s concerns are unfounded. As yet, no connection between microwaves and cancer or any other condition has been proven. Even the late 1980s study, which actually sparked off many of the safety rumors, wasn’t decisive. Although there are a few safeguards that you should be aware of in using a microwave oven, the judgment of experts is that they’re generally harmless.

Use of a microwave oven has never caused anyone to suffer from cancer, or any other illness. Cancerous conditions are caused by ionizing radiation and x-rays – the opposite of microwaves which put out non-ionizing radiation. However, despite the fact that radiation isn’t a danger, there are some safety concerns you should become aware of. Microwaving is not without danger, much like any other food preparation technique .

As an illustration, if you heat liquids in a microwave dish with a smooth surface, they can overheat. Paradoxically, they might rise to a temperature above boiling point without actually boiling. Adding other foodstuffs or moving the dish will disturb the fluid, at which point it might begin to boil violently. Severe scalding can result from the sudden burst of water and steam this generates. While you may have heard that this only occurs with distilled water, microwaves can in fact overheat other liquids, like coffee or tea.

Be Sure Containers are Vented

Various other food items can be dangerous, as well. There is a possibility of explosion in microwaves when using containers that are not suitably ventilated, or types of food with a skin or shell, including potatoes and eggs. Steam can build up inside these foods or containers, with no means to escape, resulting in an explosion. The food will burst under the pressure in the end. This could possibly cause burns as well as a big mess. Products that have been heated for long periods of time can also catch fire.

Never Under Any Circumstances Put Metal in a Microwave

Most people are aware not to place metal objects in a microwave. Arcing electricity or sparks can occur when an electric charge is generated because the metal in the object is resonating. Microwaving a takeout box with a metal handle, or a twist tie with a wire inside, can cause fires. Before using your microwave, be very careful to remove any metal, if you want to avoid the danger of fire.

You must also be careful not to use your microwave oven when it’s empty. When microwaves are operated with nothing inside to absorb the radiation, they will form a standing wave inside. When it gets reflected between the cooking chamber and the tube, this energy could possibly burn out your microwave. This is a further reason why you ought not microwave food inside a metal covering or food that has been dehydrated. Instead of absorbing the wave, these materials will reflect it.

Foods that are not arranged correctly can also lead to arcing. An example of foods that are vulnerable to this is grapes. Fire inside the microwave will also generate a spark of electricity – never put anything that’s on fire inside your oven. Even if they don’t look warm, handle all foodstuffs very carefully. They may be warmer than they seem, and liquids can be particularly hazardous. You’ll have no problem producing safe, flavorsome food with your microwave, so long as you treat it with care. So, the bottom line is that you can prepare meals with a microwave oven with the knowledge that it will present no risks when used properly. Just remember the points mentioned above, as microwaves need a few special safety measures, similar to any other cooking technique.